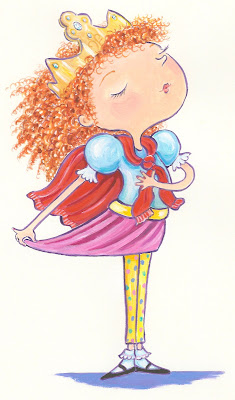 Princess K.I.M. The Musical is a touching, upbeat and humorous play about a little girl named Kim, who along with her geeky Dad, move to a new town. Kim, who has lost her mother and now struggles to find her way without her, desperately wants her new classmates to like her, so she tells a teeny tiny lie…she says that her name is really “K.I.M.”-- "Katherine Isabella Marguerite"- and that she is a Princess. At first, Kim relishes in the Royal attention, but when her lie grows and GROWS, her life gets very complicated, especially when her theatrical Grandmother comes to visit and is mistaken for the Queen! When the truth is revealed, the kids reject Kim for her deceit.  Kim then thinks that telling only the truth will reverse her mistake. Kim's comical but brutal truths only alienate everyone further. With the help of many, including her exuberant grandmother, who the classmates grow to admire, her wise father and her mother’s wisdom, written in a journal during her illness, Kim finds the courage to drop her ‘Royal ruse’ and simply be her charming self.


Delightful music, true-to-life dialog and a tender expression of love, strength and acceptance will touch your heart and have you singing along. The underlying thread of the classroom’s Poetry Performance ties the play’s elements together for a moving and electrifying finale, where Kim finds her YOU and an empowered audience is reminded that WE BELONG!

The idea behind the Play:
I learned that a little lie can grow after I told my first grade classmates that my father owned the Coca-Cola Company, (he doesn't!) Based on the idea that a tiny lie can grow into a big problem, I developed a story about a little girl who wants so much to fit into her new school that she tells a teeny tiny lie...that she is from royalty. That lie grows and grows until it's ready to explode.

Albert Whitman and Co bought my story, and in 2009, "Princess K.I.M. and the Lie that Grew" was published. This book went on to become a hit and the sequel, "Princess Kim and Too Much Truth" was published in 2011.

While writing and illustrating these books, I began to realize that the story and characters would make great children's play. In 2011, I gathered a talented team; Toby Tarnow, Andrew Cass, and Premik Russell Tubbs. We worked for several years to develop PRINCESS K.I.M. THE MUSICAL!  In 2012 we won a National New Play Festival. What followed were several productions in Ohio, New Hampshire, New Jersey and California. Now you can license the play! There are three versions; Full (110 min),  JR (75 Min), TYA (50mins)
Find the version that is perfect for your theater--
Visit the "License the Play" link for more information.

(From the song, We Belong:)

FROM THIS STAGE TO THE WORLD OUTSIDE,
LET’S STAND TOGETHER WITH OUR MINDS OPEN WIDE.
WE BELONG
ON THE WAY TO THE DISTANT STARS,
EMBRACING ALWAYS WHO WE ARE.
WE BELONG.

YOU BELONG at our play....I  look forward to seeing you there.
Maryann Cocca-Leffler

Email ThisBlogThis!Share to TwitterShare to FacebookShare to Pinterest
Home
Subscribe to: Posts (Atom)
We invite you to follow Princess K.I.M. The Musical,
an Award winning original children's musical. You can now bring Princess K.I.M. to your community. Performance rights for three versions of the play are available.
We look forward to seeing where Princess K.I.M. goes next!
Explore the blog.
Hope to see you at a show soon.
With Royal Wishes-
Maryann, Toby, Andrew & Premik
Follow @PrinKimPlay
OUR SUPPORTERS & SPONSORS