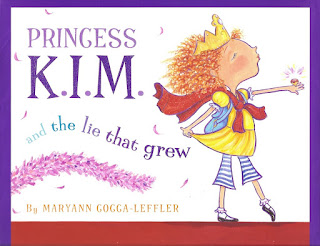 At the same time, I was contacted by Artistic Director, Chase Leyner of Hoboken Children’s Theater  (http://www.hobokenchildrenstheater.com) who was looking for a 50 minute TYA version of Princess KIM. Chase and I and our teams put our heads together and the TYA version was born. Princess K.I.M. The Musical TYA had a successful 8-week run at the Hoboken Children’s Theater, New Jersey in 2015.

The stars aliened once again when an agent from Stagerights, after attending our California show, offered to represent Princess K.I.M. The Musical. So- the path from Page to Stage has brought us here, with hopes that the road will continue with many productions across the nation.


…And to think, it all started with a teeny tiny lie I told in first grade.

Check out our page in StageRight's Online Catalog

THREE versions of Princess K.I.M. The Musical are being offered for license:
DIscover the perfect play fro your theater or school:
1. FULL LENGTH: (Two Acts- 19 Songs) 110 mins
2. JUNIOR: (One Act- 16 Songs)  75 mins
3. TYA: (One Act-11 Songs) 50 mins
StageRights would be happy to send off a Persual Pack for review.
You can also request a catalog to be mailed to you.
Two Page Spread in the Printed Catalog 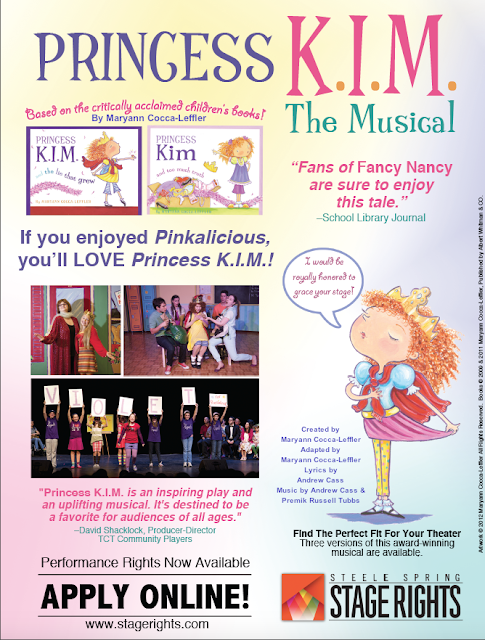 If you know of a theater who may be
interested in performing  Princess K.I.M. The Musical,
please share this information.


We're so excited to see where Princess K.I.M. goes next!
Royally- Maryann and the Team,
Toby, Andrew and Premik

Posted by Maryann Cocca-Leffler at 10:03 AM No comments:

I was so proud to attend the opening of the Theatre for Young Audiences production of
Princess K.I.M. The Musical
at Mile Square Theatre/  Hoboken Children's Theatre.
Thank you to Chase Leyner (Producer/AD), Don Brewer (Director)
and Scott Pearson (Musical Director) for an exceptional job!
BRAVO to the amazingly talented cast... all Broadway-Bound pros!
So--if you are anywhere near Hoboken, NJ- please pack up your family
and attend. You won't be disappointed!
VISIT: Mile Square Theatre for dates and Ticket info.
Two shows will be performed on Saturdays through Jun 27th!
Photos and a Clip below from May 16 show:

Hope you get to see the play! It's fantastic.
Maryann
Posted by Maryann Cocca-Leffler at 7:16 AM No comments:

It's a Princess K.I.M. Month!
Princess K.I.M.The Musical (2 acts) opened on May 8 at the BeeKay Theatre in Tehachapi California performed by the Tehachapi Community Players. For tickets and info: www.tctonstage.com
I will be attending May 22 and 23.
~~~
Also THIS weekend, May 16, the Hoboken Children's Theatre at Mile Square Theatre OPENS Princess K.I.M. The Musical (TYA)! Tickets: www.milesquaretheatre.org
I'll be at both shows on May 16th!

Here are photos from the California Opening:

Posted by Maryann Cocca-Leffler at 1:44 PM No comments: 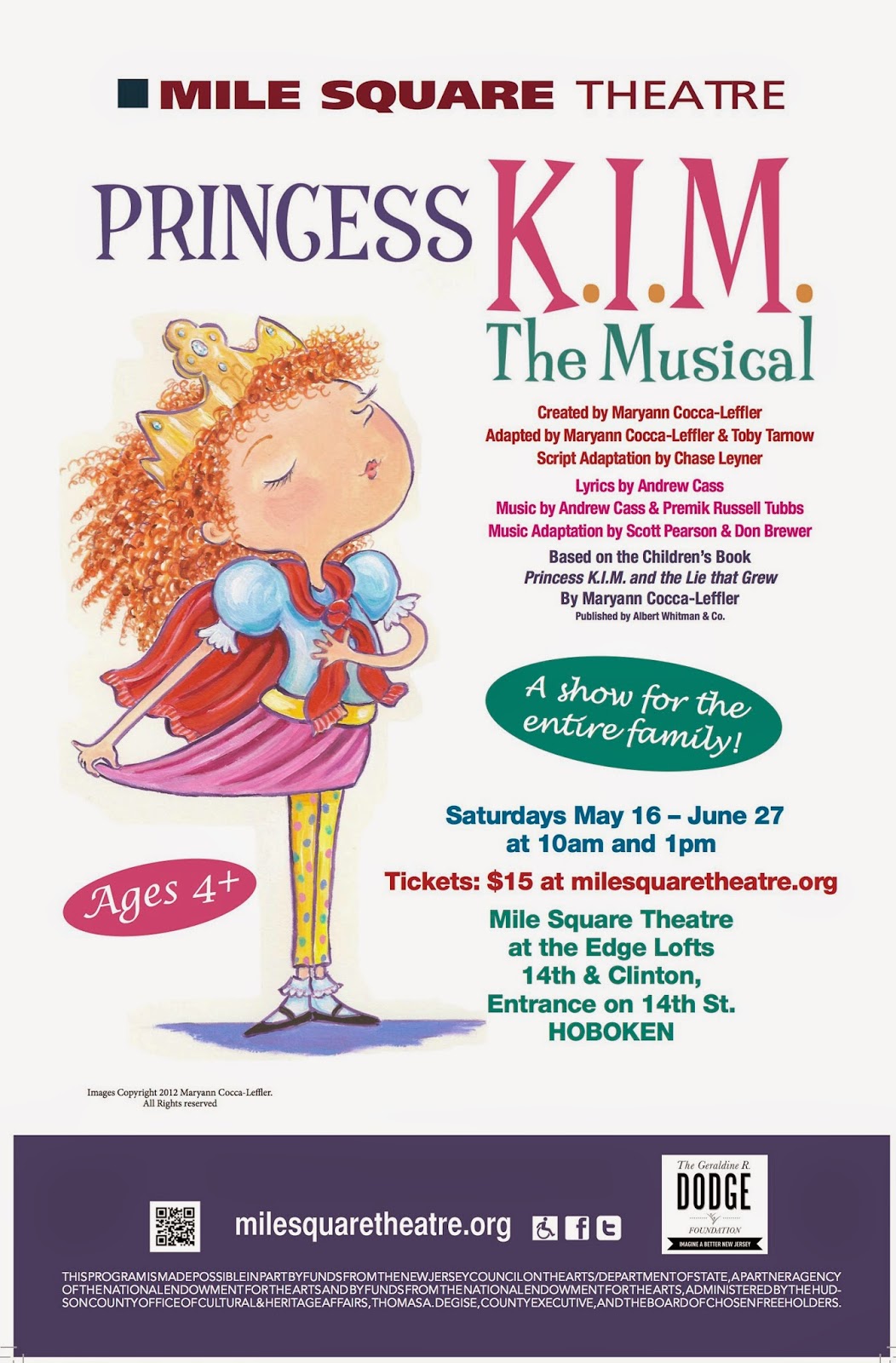 
SPECIAL EVENTS:
May 16: The author, Maryann Cocca-Leffler, will be on hand at the theatre to sign books after both performances and will give a talk back after the 1pm performance.

May 17: At 11am, the author, Maryann Cocca-Leffler, will be at Little City Books doing a reading and book signing, and cast members will be on hand to do a musical number.
Little City Books is located at 100 Bloomfield Street, Hoboken, NJ

For more information. including BIOS on both shows,
click the SHOWS LINK above.

Posted by Maryann Cocca-Leffler at 11:53 AM No comments:

We invite you to follow Princess K.I.M. The Musical,
an Award winning original children's musical. You can now bring Princess K.I.M. to your community. Performance rights for three versions of the play are now available through StageRights.
We look forward to seeing where Princess K.I.M. goes next!
Explore the blog.
Hope to see you at a show soon.
With Royal Wishes-
Maryann, Toby, Andrew& Premik

Maryann is the author and illustrator of the children's books, Princess K.I.M. and the Lie that Grew and Princess Kim and Too Much Truth from which this play is based. Maryann has written and illustrated over 50 books for children and has worked with most major publishers. She holds a BFA in Illustration from the Massachusetts College of Art. A Boston native, Maryann lives in New Hampshire with her family. Please visit her website